You are here : Home » Special Plastisols

Special plastisols encompass metallic’s and other grades outside the categories mentioned.

KST5012 and KST5017 are silver effect compact and foam plastisols respectively.
The above plastisols can be printed through fine screens.
2036 is a hard, low-blow plastisol. This can be useful in contact areas where a tough finish is important.

A series of compact metallic plastisol effects suitable for printing through fine screens such as a Penta 135. These grades can be manufactured with different gloss levels and can also be formulated to make the plastisol rub resistant

Supplied as a clear base with reflecting glitter particles, the plastisol can be used as a starting point for producing individual colours using normal pigment dispersions. This base can be supplied in both a matt or glossy finish.

A better effect can be achieved by coating the glitter plastisol over a coloured background.

The glitter plastisols can be supplied either with a 100 micron or a 200 micron size glitter particle. The screen should be chosen so that the holes are not blocked during printing. This should be no finer than a CH40 22% screen.

A very matt plastisol that can be expanded to give a modern tactile feel.

• Can be coloured with normal pigment dispersion to give a feel and effect like flock wallcovering
• Highly effective when used in contrast with a glossy plastisol such as KST 5003.

Based on a compact pearl plastisol, the system can be used as a flexible base for tinting a variety of pearlescent shades, with the use of normal pigment dispersions.

KST5003 is a clear glossy plastisol which can be easily tinted for dark colour ways, or used as a gloss lacquer. PS847 is a matt version of this grade. 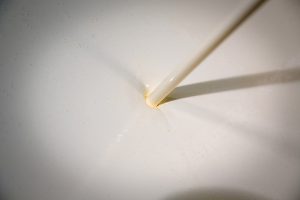 We use cookies to give you the best possible online experience. If you continue to use our website, you agree to our use of cookies.
Read More…

Cookie information is stored in your browser and performs functions such as recognising you when you return to our website and helping our team to understand which sections of the website you find most interesting and useful.

Strictly Necessary Cookie should be enabled at all times so that we can save your preferences for cookie settings.

If you disable this cookie, we will not be able to save your preferences. This means that every time you visit this website you will need to enable or disable cookies again.